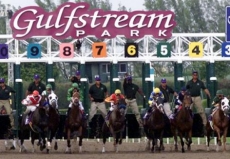 On Saturday at Gulfstream Park, the road to the Kentucky Derby continues with the $400,000 Holy Bull Stakes. The Grade 2 race, run at a mile and a sixteenth, has attracted a field of ten colts and geldings competing for points towards a berth in the Kentucky Derby.

Upstart tops the field as the morning line favorite at odds of 2-1 for trainer Richard Violette, Jr. A ridgling son of Flatter purchased for $130,000 as a yearling, he was last seen finishing third in the Breeders’ Cup Juvenile (G1) after a slow start and a troubled trip. He won the first two starts of his career against restricted New York-bred competition and was second in the Champagne (G1). Regular rider Jose Ortiz will be in the irons from post position eight.

Second choice at morning line odds of 5-2 is Frosted for trainer Kiaran McLaughlin. A gray son of Tapit owned by Godolphin Racing, the colt is out of the graded stakes winning mare Fast Cookie. He broke his maiden in his third career start last fall and was second in the Remsen (G2) as the favorite in his stakes debut. He has been training forwardly for his sophomore debut and will have regular rider Irad Ortiz, Jr. in the irons from the rail.

Also in the field at morning line odds of 15-1 is longshot High Noon Rider for trainer George Weaver. Purchased for $400,000 as a yearling, the bay son of Distorted Humor has been on the board in three of his four starts. He broke his maiden at Aqueduct in November and was last seen finishing third in the Springboard Mile. He has had a bullet workout since that race and will get a rider change to jockey Joel Rosario from post position three.