Upstart Back Off of Layoff in $350,000 Razorback Handicap 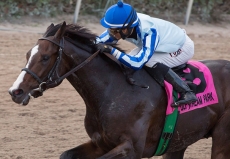 On Saturday at Oaklawn Park, the stakes action will continue with the $350,000 Razorback Handicap. Scheduled to be run at a mile and a sixteenth on the main track, the Grade 3 has drawn a field of ten colts and geldings but will have eight betting interests due to a three-horse entry.

Upstart tops the wide open field as the morning line favorite at odds of 5-2 for trainer Rick Violette, Jr. A four-year-old son of Flatter, he has won three of his eleven starts and has hit the board a total of eight times. After several layoffs during his three-year-old year, he will be returning to the races for the first time since finishing fifth in the Pennsylvania Derby (G2) in September. He has been training steadily and will have Joe Bravo aboard from post position seven.

Far Right back in form off of allowance victory

Second choice at morning line odds of 3-1 is Far Right for trainer Ron Moquett. A chestnut son of Notional, he has won four of his fourteen starts and was a graded stakes winner at Oaklawn Park as a three-year-old. He returned off of a six-month layoff to finish second in an allowance race in January and wheeled back to win his second start back the following month. Irad Ortiz, Jr. will be aboard and they will break from post six.

Graded stakes winner Carve back off of six month break

Also in the field at morning line odds of 4-1 is Carve for trainer Steve Asmussen. A dark bay son of First Samurai, the six-year-old gelding has been on the board in sixteen of his 25 starts and is a seven-time winner. He returned off of a six-month layoff last time out to finish third in the Essex Handicap and will be trying to earn the second graded stakes win of his career. Corey Nakatani will be in the irons and they will break from post position three.