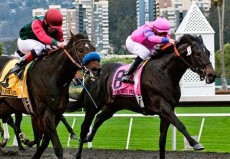 On Saturday at Santa Anita, the featured race is the $100,000 California Flag Handicap. Scheduled to be run at six and a half furlongs on the Downhill Turf, the race has drawn a field of six colts and geldings.

Topping the field at morning line odds of 2-1 is the undefeated Red Outlaw for trainer Peter Miller. The three-year-old gelded son of Tribal Rule is a perfect five for five, four of which have come this year. His last two victories came against stakes company on Del Mar’s synthetic main track but he did win over the Santa Anita turf in February. Edwin Maldonado, aboard for three of his wins, will be aboard from the outside post.

Boozer has been tabbed at second choice on the morning line at odds of 5-2. Trained by Mark Glatt, the California-bred son of Unusual Heat will be making his stakes debut after winning an allowance race on the turf at Del Mar last time out. He has won four of his eleven starts, two of which came at Santa Anita. Rafael Bejarano will remain in the irons and they will break from post position five.

Also in the field at odds of 3-1 on the morning line is Tamarando, a multiple graded stakes winner for Jerry Hollendorfer. He will be making his first start since finishing fourth in his turf debut at Santa Anita in April. He has won four of his twelve career starts, most notably the Del Mar Futurity (G1) as a juvenile. Mike Smith will be aboard for the first time and they will break from post five.