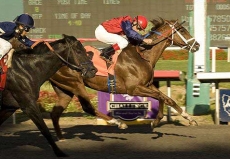 On Saturday at Del Mar, the featured race is the 33rd running of the Grade 3 Bob Hope Stakes. The $100,000 race, formerly known as the Hollywood Preview, has drawn a field of nine two-year-olds to compete at seven furlongs on the main track.

Prime Engine, making his first start for trainer Jerry Hollendorfer, has been installed as the morning line favorite at 3-1. Purchased for $110,000 at Keeneland as a yearling, the chestnut son of Northern Afleet is a perfect two for two at Emerald Downs. He will be cutting back to a sprint after winning around two turns last time out and will be trying synthetics for the first time. Mike Smith will be aboard from post four.

Alright Alright is second choice on the morning line for trainer Darrell Vienna. A $205,000 purchase in March, the chestnut colt is from the first crop of popular freshman sire Munnings. He broke his maiden at first asking in October at Santa Anita and will be trying Del Mar’s synthetic main track for the first time. Drayden Van Dyke, aboard for his debut win, retains the mount and they will break from post six.

Diamond Majesty going for two wins in a row

Also in the field at 9-2 on the morning line is Diamond Majesty for trainer Patrick Biancone. A $225,000 purchase earlier in the year, the dark bay colt is from the first crop of multiple champion Lookin at Lucky. After finishing third in his debut, he switched to the turf at Santa Anita and delivered as the favorite to break his maiden. Martin Pedroza will be back aboard from post position three.