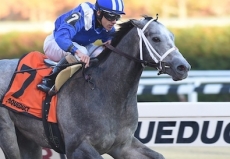 On Saturday at Gulfstream Park, the featured race is the $350,000 Holy Bull Stakes. Restricted to three-year-olds, the Grade 2 event will be contested at a mile and a sixteenth and has drawn a field of six colts and geldings.

Mohaymen tops the compact field as the morning line favorite at odds of 6-5 for trainer Kiaran McLaughlin. A gray son of Tapit, he was purchased for $2.2 million as a yearling and is undefeated from three career starts. As a juvenile, he won back to back graded stakes races in New York before getting a freshening to prepare for his three-year-old year. He turned in a recent bullet workout in preparation for this race and will have Junior Alvarado aboard from post position two.

Greenpointcrusader trying to return to form

Second choice at morning line odds of 8-5 is Greenpointcrusader for trainer Dominick Schettino. A dark bay son of Bernardini, he has won half of his four starts and earned his biggest victory in the Champagne Stakes (G1) as a juvenile. He has been on the shelf since finishing seventh in the Breeders’ Cup Juvenile (G1). John Velazquez will be aboard and they will break from post position five.

Also in the field at morning line odds of 7-2 is Conquest Big E for trainer Mark Casse. Purchased for $700,000 as a yearling, the gray son of Tapit has won two of his four starts and will be trying to earn his first black type victory. He is stepping back up to stakes competition and was last seen winning an optional claiming race at Churchill Downs. Mike Smith will be aboard from post four.