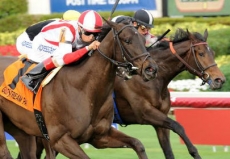 On Saturday at Gulfstream Park, the stakes action will continue with the $100,000 Old Hat Stakes. Restricted to three-year-old fillies, the six-furlong contest is a Grade 3 event and has drawn a field of six.

Lucy N Ethel tops the wide open field as the morning line favorite at odds of 8-5 for trainer Ramon Preciado. A dark bay daughter of During, she is undefeated from two starts and will be making her first start against stakes competition. She broke her maiden at first asking at Parx Racing and followed that up with an allowance victory in her next start. Joshua Navarro will be in the irons and they will break from post position five.

Second choice at morning line odds of 9-5 is Ballet Diva for trainer Stanley Gold. A chestnut daughter of Hear No Evil bred and owned by Jacks or Better Farm, she has won four of her six starts and is a multiple stakes winner. She was last seen winning the House Party Stakes and will be stepping up to graded stakes company for the first time. Jose Caraballo will be aboard and they will break from the rail.

Also in the field at morning line odds of 4-1 is Dad’s Kiddo for trainer Dane Kobiskie. A bay daughter of Proud Citizen, she was purchased for $65,000 as a yearling and has been on the board in all four of her starts and will be trying to earn her second career win and first stakes score. She was second in an optional claiming race last time out and will break from post three under Rafael Hernandez.