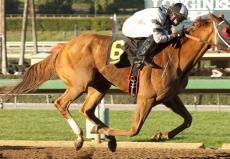 A field of seven is set to line up for the $400,000 Grade 1 Santa Margarita Stakes for fillies and mares going a mile and an eight March 14 at Santa Anita.

Warren’s Veneda, winner of the Paseana Stakes and Grade 2 Santa Maria Stakes in her last two starts, is the 2/1 morning line favorite for trainer Craig Lewis.  The five year-old California-bred daughter of Affirmative is in career-best form as she goes for her first grade 1 victory.  Warren’s Veneda has won 7 of 21 career starts for earnings of $587,612.  She will break from post seven under jockey Tyler Baze.

Dame Dorothy ships to Santa Anita for trainer Todd Pletcher after capturing the Florida Sunshine Millions Distaff in her last start January 17 at Gulfstream Park.  The four year-old daughter of Benardini has done little wrong in her career winning five of six starts including a grade 3 score in the Turnback the Alarm Handicap October 26 at Belmont Park.  She suffered her lone setback in the Grade 3 Comely Stakes November 29 at Aqueduct while finishing third.  Rafael Bejarano gets the call breaking from post three.

It’s rare to see a Larry Jones trainee ship to the west coast, but Cassatt (3/1) is doing just that after the Zia Park Oaks, Tiffany Lass Stakes, and Houston Ladies Classic in succession at three different tracks since November 26.  Cassatt has six wins in nine career starts and seeks her first graded stakes win.