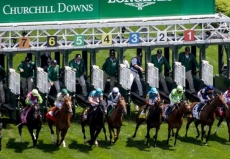 On Saturday evening at Churchill Downs, the track will hold the $100,000 Regret Stakes. Restricted to three-year-old fillies, the Grade 3 event will be run at a mile and an eighth on the turf and has drawn a field of eleven.

Auntie Joy tops the wide open field as the favorite at odds of 3-1 for trainer Brendan Walsh. Bred and owned by Sanford Robinson, the bay filly is from the first crop of champion Uncle Mo and has two wins from five starts. She will be trying to earn the first stakes victory of her career and was last seen finishing second in the Edgewood Stakes (G2) as part of the Kentucky Oaks undercard at Churchill Downs. Brian Hernandez, Jr. will be aboard and they will break from the outside post.

Noble Beauty stepping up in class

Second choice at morning line odds of 7-2 is Noble Beauty for trainer Chad Brown. A bay daughter of Kitten’s Joy, she is stepping up to graded stakes company for the first time. She broke her maiden in her career debut against maiden claiming company and followed that up with a runner-up effort in the Honey Ryder Stakes. Both of her efforts came at Gulfstream Park. Julian Leparoux will be aboard from post five.

Also in the field at morning line odds of 6-1 is Wessex for trainer Bill Mott. A homebred daughter of Unbridled’s Song for Juddmonte Farms, she broke her maiden in her first start at Gulfstream Park and was second in her next start, the Hilltop Stakes at Pimlico. She has been training steadily since her last race and will break from post position ten under jockey Shaun Bridgmohan.