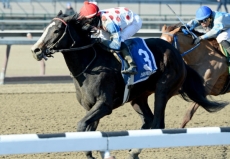 On Saturday at Aqueduct, the track will host the $100,000 Broadway Stakes. Restricted to fillies and mares bred in New York, the six furlong contest has drawn a field of six.

Tricky Zippy tops the competitive field as the morning line favorite at odds of 2-1 for trainer James Jerkens. A four-year-old daughter of City Zip, she has been on the board in nine of her twelve starts and is a five-time winner. She was a stakes winner last year at three and will be stepping back up to black-type competition after a third-place finish in an allowance race at Aqueduct. Angel Arroyo will be aboard and they will break from post position two.

Second choice at morning line odds of 5-2 is the veteran mare Willet for trainer James Iselin. An eight-year-old daughter of Jump Start, she is a ten-time winner and a multiple state-bred stakes winner. After winning her final start of 2015, she made her first start of the year against allowance competition and finished third. Irad Ortiz, Jr. will be aboard and they are scheduled to break from post position three.

Also in the field at morning line odds of 4-1 is Blithely for trainer Mark Hennig. A five-year-old daughter of Exchange Rate, the gray mare has been on the board in ten of her twelve starts and is a five time winner. She will be trying to earn the first stakes victory of her career and is coming out of an allowance victory in January where she defeated Willet. Junior Alvarado will be aboard and they will break from post position five.