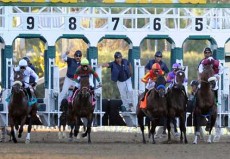 On Sunday at Del Mar, the featured race is the 18th running of the Betty Grable Stakes. With a purse of $100,000, the seven-furlong race has drawn a field of nine fillies and mares either bred in California or sired by a California stallion.

Tribal Gal has been tabbed as the 7-2 morning line favorite. Trained by Kory Owens for owner and breeder John Pendergast, the four-year-old daughter of Tribal Rule has been first or second in four of her five starts this year. A multiple stakes winner, she has eight wins from twenty total career starts. She was last seen finishing second at Santa Anita and will have Victor Espinoza aboard from the outside post. She has had two consecutive bullet workouts since her last race.

Warren's Veneda a triple threat on any surface

Second choice at 9-2 on the morning line is Warren’s Veneda for trainer Craig Lewis. A four-year-old daughter of Affirmative, she is winless from six starts this year and was last seen finishing sixth against state-bred stakes company on the turf at Santa Anita. She has won on turf, dirt and synthetics and is going for the sixth victory of her career. Tyler Baze will be aboard and they will break from post position four.

Sweet Marini going for first win of the year

Also in the field at 5-1 on the morning line is Sweet Marini for Breeders’ Cup Classic winning trainer Bob Baffert. A four-year-old daughter of Marino Marini, she has won three of her nine starts including a minor stakes race at Del Mar last year. She is trying to earn her first win of the year and has hit the board once from three starts so far. She was fifth last time out at Santa Anita and will be reunited with Martin Garcia.