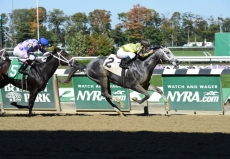 With a full field of 14 expected to go to the gate and a number of graded-stakes winners at double-digit odds, the $1.25 million Grade 1 Travers Stakes is shaping up to be one of the best betting events of the year. At the top of the list in the morning line at 3-1 is Preakness Stakes and Haskell Invitational winner Exaggerator, who could make a solid claim for Three-Year-Old Horse of the Year with a win. The well-documented knock against him is that he has yet to claim a major win on anything but an off track, and the forecast for Saturday at the Spa isn't calling for rain.

Several of the horses in the field met up recently in the Jim Dandy at Saratoga, a race won by Laoban (15-1) who made the lead right out of the gate and was able to get away with fairly soft fractions early to steal it at odds of 27-1. Expect a quicker pace here, with the likes of Gun Runner (10-1), American Freedom (6-1) and perhaps Connected (4-1) wanting to challenge early. That being said, the Saratoga dirt is not overly kind to deep closers such as Creator (15-1) and Exaggerator, and the race sets up well for a horse that can get in good position to run just behind the leaders until they turn for home. While he hasn't shown the greatest acceleration in the late going, Belmont Stakes runner-up Destin (10-1) meets the criteria of a horse that can settle just off the lead early, he gets a great post position, and the 1 1/4 miles Travers distance seems right in his wheelhouse.