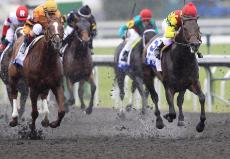 Without the looming presence of two-time reigning horse of the year Wise Dan, the Grade II Firecracker Stakes on June 28 at Churchill Downs looks much more winnable than it has in recent years.

Churchill-based trainer and Louisville native Dale Romans will saddle two horses in the $200,000 race contested at a mile over the turf course. Silver Max, favored at 8-5 in the morining line and ridden by Robby Albarado, drew post position five, while Guys Reward (10-1) will be ridden by Jesus Castanon and break from the rail. Guys Reward captured the 2012 running of the Firecracker; Silver Max is a nine time stakes winner including an off-the-turf upset of Wise Dan last October at Keeneland in the Shadwell Mile.

Second choice in the morning line is a former BC champ

The formidable Romans duo could face stiff challenges from Nikki’s Sandcastle (6-1) who most recently won the grade III Hanshin over Polytrack at Arlington Park, and Regally Ready (5-2), a speedy former Breeder’s Cup Turf Sprint champion in 2011. Regally Ready, trained by Steve Asmussen, stretched out nicely over the Churchill Downs turf course May 31 to capture the Opening Verse at a mile and a sixteenth and is the likely pacesetter in the Firecracker.

A victory by either Romans horse would represent the trainer’s fourth Firecracker win in the last ten runnings. Wise Dan captured the Firecracker in 2011 and 2013, while sitting out the 2012 edition. Wise Dan’s 2011 victory marked his first race over turf and the launch of his brilliant career running on grass. The Charles Lopresti trainee continues to recover from colic surgery.