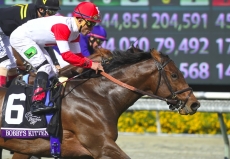 On Saturday at Keeneland, the championship racing will continue with the $1 million Breeders’ Cup Turf Sprint. Scheduled to be run at five and a half furlongs on the turf, the Grade 1 event has drawn a full field of fourteen.

Topping the wide open field as the favorite at odds of 5-2 is Lady Shipman, a three-year-old filly who will be facing male rivals. Trained by Kathleen O’Connell, the chestnut daughter of Midshipman has been on the board in all eleven starts and is an eight-time winner. After four consecutive victories, she was second at Keeneland last time out. Irad Ortiz, Jr, aboard for her win two races back, will be back aboard and they will break from post five.

Undrafted, one of three horses in the race for trainer Wesley Ward, is the second choice at odds of 4-1 on the morning line. Owned in part by unsigned wide receiver Wes Welker, the five-year-old gelding is a five-time winner and was third in this race last year. He has been on the board in all four starts this year and won the prestigious Diamond Jubilee Stakes (G1) at Royal Ascot. Frankie Dettori will be back aboard and they will break from post position three.

Also in the field at morning line odds of 15-1 is Bobby’s Kitten, the defending Breeders’ Cup Turf Sprint (G1) winner for trainer Chad Brown. A four-year-old son of Kitten’s Joy bred and owned by Ken and Sarah Ramsey, he has been off the board in both of his starts this year and is trying to rebound after a ninth-place finish in the Shadwell Turf Mile (G1). He will get a jockey change to Javier Castellano and they will break from post two as he tries to show some improvement.