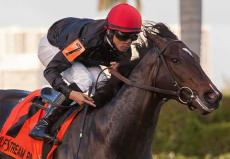 With Kentucky Derby winner California Chrome still on the shelf, the race for champion three-year-old will heat up in Saturday’s $1.25 million Travers Stakes. The Grade 1 event, known as the “Mid-Summer Derby”, has attracted a field of ten to compete at a mile and a quarter.

Bayern, the authoritative winner of the Haskell Invitational (G1), has been installed as the morning line favorite at 2-1. Trained by Bob Baffert, the three-year-old son of Offlee Wild has won his last two starts since a disappointing ninth-place finish in the Preakness Stakes (G1). Bayern will have Martin Garcia back in the irons and the pair will break from post position two. From seven starts, Bayern has four wins, three of which have come against graded stakes competition.

Second choice on the morning line is Belmont Stakes winner Tonalist at odds of 3-1. The bay son of Tapit is trained by Christophe Clement and will try to improve off of a runner-up effort to Wicked Strong in the Jim Dandy (G2) at Saratoga. The lightly-raced colt has been first or second in five of his six starts and denied California Chrome the Triple Crown in the Belmont Stakes. He will have Joel Rosario aboard and the pair will break from post position six.

Also in the field is longshot Mr Speaker, tabbed at 10-1 for trainer Claude McGaughey. Bred and owned by Phipps Stable, the son of Pulpit will try dirt for only the second time after competing primarily on turf. He won the Belmont Derby (G1) by a neck on the lawn in his last start over a star-studded international field. By Pulpit, he is out of a graded stakes placed daughter of the Hall of Fame mare Personal Ensign. He is slated to break from the outside post with regular rider Jose Lezcano.