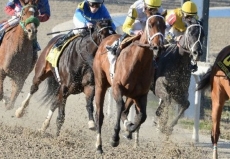 The $125,000 Silverbulletday Stakes January 17 at Fair Grounds might offer an early glimpse at Kentucky Oaks contenders, as each filly in the field of nine is set to make their seasonal debut in the mile and seventy yard event.

8/5 favorite Top Decile returns after falling just a half length short of winning the Breeders’ Cup Juvenile Fillies in her last start November 1.  The Albert Stall trainee has just a maiden win to her credit in three career starts, but also ran second in the Grade 1 Alcibiades at Keeneland.  Top Decile, a daughter of Congrats, showed excellent closing speed in both races, and will benefit from a strong early pace.  Stall hits with 24% of his runners returning from layoffs of 61-180 days.

West Coast Belle (2/1) was ultra-impressive winning the Grade 2 Golden Rod Stakes at Churchill Downs to close her two-year old campaign.  The daughter of leading sire Tapit is undefeated in three starts for trainer Wayne Catalano and has shown improvement each race.  The Golden Rod was West Coast Belle’s first try around two-turns - the same trip she will get in the Silverbulletday.  Like Top Decile, West Coast Belle has shown the tendency to run from well off the pace in each of her starts.

Forever Unbridled (6/1) is the daughter of 2005 Kentucky Oaks winner Lemons Forever, and was an impressive maiden winner in career start number two December 12 at Fair Grounds.  The Dallas Stewart trainee won that race at the same distance as the Silverbulletday, and will not have to improve much to have a major say in the outcome.