Tonalist And Private Zone Meet in The Middle in Cigar Mile 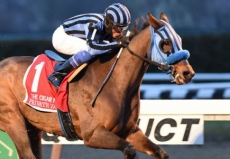 In a clash of thoroughbred titans, the Grade 1, $500,000 Cigar Mile Saturday, November 28 at Aqueduct features two of the best older horses in training at a distance that presents unique challenges for each.

Private Zone, the 6/5 morning line favorite, is an elite sprinter, but has proven his effectiveness at the one-mile distance, including a win in last year’s Cigar Mile. The six year-old gelding ran too good to lose last-out, running second in the Grade 1 Breeders’ Cup Sprint, beaten just three quarters of a length after getting run down by Run Happy who set the Keeneland track record. Private Zone, formerly trained by Jorge Navarro, will be making his first start out of the Brian Lynch barn. Lynch connects at a stellar 26% clip with runners making their first start under his care. Private Zone is the controlling early speed in the race, but reports of an irregular training regimen in recent weeks will leave some handicappers skeptical.

Tonalist looks to add to resume

Tonalist (2/1) has amassed over $3.1 million in his impressive career, and cuts back to the mile distance following a troubled fifth-place effort in the Grade 1 Breeders’ Cup Classic. Tonalist will don blinkers once again for trainer Christophe Clement. Despite Tonalist’s reputation as an established distance horse, the four year-old son of Tapit proved his ability at eight furlongs earlier this year with an impressive score in the Grade 3 Winchester and equally admirable effort while running second in the Grade 1 Metropolitan Handicap.

Mshawish could be enticing at his morning line odds of 10/1 as the top-class turf horse makes his first start on dirt. The Todd Pletcher trainee ran a respectable fourth last-out in the Grade 1 Breeders’ Cup Mile.