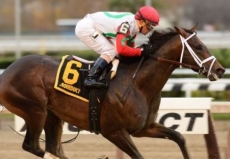 On Saturday at Aqueduct, the featured race is the $100,000 Queens County Stakes. Carded at a mile and an eighth on the inner main track, the stakes race has drawn a field of seven colts and geldings.

Tommy Macho tops the field as the morning line favorite at odds of 2-1 and is one of two horses in the race for trainer Todd Pletcher. A three-year-old son of Macho Uno, he has been on the board in six of his seven starts and is a three-time winner. He earned his first graded stakes victory last time out in the Discovery Handicap (G3) and will be trying for his second straight score. Javier Castellano will be aboard and they will break from post position four.

Kid Cruz trying for first win of the season

Second choice at morning line odds of 5-2 is Kid Cruz for trainer Linda Rice. A four-year-old son of Lemon Drop Kid, the bay colt has won five of his fifteen starts and was a graded stakes winner as a sophomore. He has gone winless from five starts this year but has been second four times. He is coming out of a runner-up effort in the Swatara Stakes at Penn National and will break from post position three with Jose Ortiz aboard.

Also in the field at morning line odds 6-1 is Financial Modeling for trainer Chad Brown. A dark bay son of Street Sense, the four-year-old colt has been on the board in five of his seven starts and will be stepping up to stakes competition for the first time after winning an optional claiming race at Aqueduct to earn his third career victory. Irad Ortiz, Jr. will be in the irons and they are scheduled to break from post positon six.