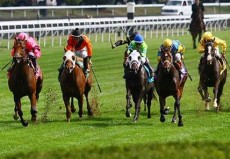 On Thursday at Keeneland, a field of nine colts and geldings will take to the turf in the 20th edition of the $100,000 Sycamore Stakes. The Grade 3 contest will be run at a mile and a half on the grass.

Unitarian has been installed as the 3-1 morning line favorite and will break from the outside post under Javier Castellano. Trained by Todd Pletcher, the four-year-old son of Pulpit has won three of his four starts this year and made his Keeneland debut a winning one last time out in the Elkhorn (G2). Bred and owned by Robert Evans, the bay colt has won four of his fifteen total starts and is going for his second graded stakes win.

Todd Pletcher will also saddle Red Rifle, second choice on the morning line at odds of 4-1. The four-year-old son of Giant’s Causeway, a $250,000 purchase as a yearling, is going for the first graded stakes win of his career after winning the Yankee Affair Stakes at Belmont Park last time out. He has won four of his eleven starts and will have John Velazquez back in the irons from post position four.

Also in the field at odds of 6-1 on the morning line is Holiday Star, a homebred for George Strawbridge’s Augustin Stables. Trained by Graham Motion, the four-year-old gelded son of Harlan’s Holiday will try to earn the first stakes win of his career. He was beaten a nose in his last two starts, both against stakes company. Rosie Napravnik will be aboard for the first time and they will break from post three.