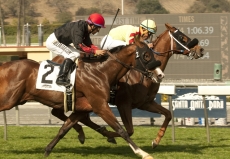 On Sunday at Santa Anita, the featured race is the $75,000 Baffle Stakes. Scheduled to be run at about six and a half furlongs on the downhill turf, the stakes race has drawn a field of six three-year-old colts and geldings.

Tiz a Billy has been tabbed as the morning line favorite in the compact field at odds of 2-1 for trainer Brian Koriner. A bay son of Tiznow, he was purchased for $200,000 as a two-year-old and has been on the board in three of his five starts. He will be trying to earn his second career victory and first black type win. He broke his maiden last time out and will be stepping up in class. Flavien Prat will be aboard and they will break from the rail.

Path of David trying to rebound after last race

Second choice at morning line odds of 5-2 is Path of David for trainer Kristin Mulhall. A bay son of Istan, the gelding cost $100,000 as a yearling and has been on the board in four of his seven starts. He has two career victories, including one against stakes company, and will be trying to rebound after finishing sixth in the Robert B. Lewis Stakes (G3) last time out. Joe Talamo will be aboard and they will break from post position five.

Also in the field at morning line odds of 7-2 is Hot Ore, one of two horses in the race for trainer Robertino Diodoro. A gelded son of Unusual Heat bred in California, he has one win from six starts and has been on the board a total of four times. He has been off the board in his last two starts, both against graded stakes competition, and has been freshened for two months since his last start. Tyler Baze will be aboard from post three.