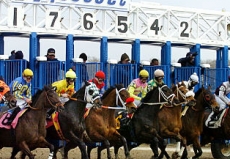 The Grade 3, $300,000 Bay Shore features eight three year-olds set to go seven furlongs on the main track April 9 at Aqueduct in a race with plenty of viable betting options.

2/1 morning line favorite Unified freaked in his debut at Gulfstream, winning by three lengths February 21 in a six furlong sprint while recording a 99 Beyer Speed Figure. If the figure holds true, the rest of the field will be running for second, but such maiden winners often fail to dubplicate these kinds of performances when confronted by better horses in their next start. Unified steps right into deep waters, bypassing the allowance ranks to face a legimate group of more experienced stakes horses. The James Jerkens trainee will have to be the real deal in order to find the winner's circle. Winning pilot Javier Castellano will be riding at Keeneland with Irad Ortiz replacing him in the saddle.

Awesome Gent (3/1) is a rapidly improving colt who matched Unified's 99 Beyer Figure last out while winning the Jimmy Winkfield Stakes March 6 at Aqueduct. The victory was the Todd Pletcher-trained gelding's third consecutive win and gives this contender a legitimate hometrack advantage over Unified. Awesome Gent has shown excellent speed while wining 3 of 4 career starts and may find himself tracking the favorite closely from the opening bell under jockey Matt Franco.

Ideal trip for Cocked and Loaded?

Cocked and Loaded (6/1) seems like an ideal candidate for racing seven furlongs - a turnback in distance while making his three year-old debut. The Larry Rivelli trainee ran against the best two year-old colts in the country last year, including a fifith-place effort in the Breeders' Cup Juvenile. If the pacesetters are tiring, this guy figures to be menacing around the turn after posting impressive workouts for his return.