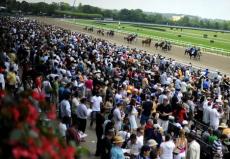 The Grade II Suburban Stakes at Belmont is part of a banner day of racing July 5 at the New York Track as part of the inaugural Stars & Stripes Festival card that features four graded-stakes races.

The $500,000, mile and a quarter Suburban attracts a classy field of ten older horses including Last Gunfighter, Vyjack, and Mylute.  Last Gunfighter is the 7/2 second choice on the morning line, but could well be the post time favorite for trainer Chad Brown.  Last Gunfighter went off at 7/5 in the 2013 Suburban, but finished second to repeat winner Flat Out.

Last Gunfighter finished the 2013 racing season with a fifth place finish in the Breeder’s Cup Classic before winning the Hawthorne Gold Cup in November.  He returned to the races in fine fashion on May 31 to win the Mountainview Handicap at Penn National.  The Tom Albertrani trained Romansh is the morning line favorite at 3/1 in the Suburban after running third in the Metropolitan Mile on Belmont Day.  Romansh won the Excelsior Stakes at Aqueduct in March.

In a well-rounded field, 2013 Kentucky Derby participants Vyjack and Mylute are 20/1 and 15/1 long shots respectively.  Shug McGaughey’s Norumbega (6/1 ML) returns after narrowly defeating the Todd Pletcher trained Micromanage (9/2) in the mile and a half Brooklyn Stakes earlier this month at Belmont.  Recent Suburban winners include Flat Out, Mucho Macho Man and Haynesfield.