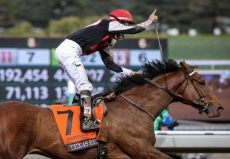 On Sunday at Santa Anita, the featured race is the $200,000 San Vicente Stakes. The Grade 2 race will be contested at seven-furlongs on the main track and has drawn a field of eight three-year-old colts and geldings trying to make their start on the road to the Kentucky Derby.

Texas Red, the upset winner of the Breeders’ Cup Juvenile (G1), will make his much-anticipated sophomore debut for trainer Keith Desormeaux. A bay son of Afleet Alex purchase for $17,000 as a yearling, he has won two of his five starts and was third behind eventual Eclipse Award winner American Pharoah in the Front Runner (G1). He has been training steadily for his return to the races and will have regular rider Kent Desormeaux aboard from post position four.

Second choice at 2-1 on the morning line is Lord Nelson for trainer Bob Baffert. A $340,000 purchase as a yearling, the chestnut son of Pulpit broke his maiden at first asking as a juvenile in July. After a fourth-place finish in the Front Runner (G1), he came back to win a minor stakes race at Santa Anita. He was last seen finishing fifth in the Kentucky Jockey Club (G2) in November. He will get a rider change to Rafael Bejarano and they will break from the rail.

Also in the field at morning line odds of 9-2 is Punctuate who also hails from the Bob Baffert barn. Purchased for $300,000 as a yearling, the bay son of Distorted Humor is the first foal to race from the New Mexico mare Pepper’s Pride. During her career, she equaled and eventually broke the North American record for consecutive wins and retired undefeated with nineteen victories. Punctuate broke his maiden in his career debut last out and will take on stakes company under Martin Garcia.