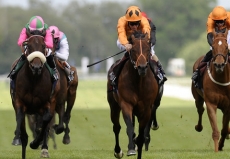 On Sunday at Woodbine, the stakes action will kick off with the $300,000 Nearctic Stakes. Carded at six furlongs on the turf, the Grade 2 race has drawn a field of eleven.

Terror (IRE) has been tabbed as the morning line favorite at odds of 3-1 in the competitive field for trainer David Simcock. A three-year-old daughter of Kodiac (GB), the filly is one of two females in the race taking on male rivals. She has been on the board in four of her seven starts and is a two-time winner who will be making her North American debut. She was second at Newmarket last time out and will have jockey Andrea Atzeni aboard from post eight.

Second choice at morning line odds of 4-1 is Cyclogenesis for trainer George Weaver. A gray son of Stormy Atlantic, the lightly-raced colt has won three of his five starts and is a two-time stakes winner. He is trying to rebound after finishing fourteenth at Royal Ascot and fourth in the Quick Call Stakes in his most recent outings. John Velazquez will be aboard and they will break from post position two.

The Great War improving with each start

Also in the field at morning line odds of 8-1 is The Great War for trainer Wesley Ward. A bay son of War Front, he was purchased for $1 million as a yearling and has won four of his eleven starts. He was briefly on the Triple Crown trail this spring before being sidelined with an injury and was second in the Quick Call Stakes last time out at Saratoga. Joel Rosario will be in the irons from post position seven.