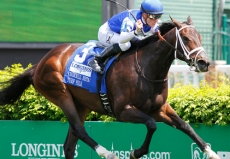 On Saturday at Keeneland, the track will host the $400,000 First Lady Stakes. A Grade 1 event for fillies and mares, the race will be contested at one mile on the turf and has drawn a field of eleven.

Tepin, one of two fillies in the race for trainer Mark Casse, tops the field as the morning line favorite at 5-2 odds. A four-year-old daughter of Bernstein, she has won five of her thirteen starts and is a multiple graded stakes winner. After three consecutive victories to start the year, she has been second in her last two starts against graded stakes competition. Julian Leparoux will be in the irons and they will break from the outside post.

Second choice at morning line odds of 4-1 is Easter (IRE), one of two European fillies in the race for Aiden O’Brien. A three-year-old daughter of Galileo (IRE), she has been on the board in eight of her eleven starts and will be trying to earn the first graded stakes win of her career. She was second in Ireland in her most recent start and will break from post position five under jockey Seamus Heffernan.

My Miss Sophia a threat on any surface

Also in the field at morning line odds of 6-1 is My Miss Sophia for Hall of Fame trainer Bill Mott. A four-year-old daughter of Unbridled’s Song, she was purchased for $2.15 million and has three wins from ten starts. Though she began her career on dirt, she has hit the board in her last two starts against graded stakes company on the turf and will break from post four with Jose Lezcano aboard.