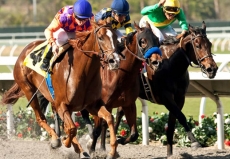 On Saturday at Santa Anita, the featured race is the 33rd running of the $300,000 Las Virgenes Stakes. The Grade 1 contest will be run at one mile on the main track and has drawn a wide-open field of ten three-year-old fillies.

Maybellene has been installed as the morning line favorite at odds of 3-1 for trainer Bob Baffert. A $140,000 purchase as a yearling, the bay daughter of Lookin at Lucky is owned by Baffert’s wife, Natalie. She has won two of her seven starts and was last seen finishing third behind eventual Eclipse award winner Take Charge Brandi in the Starlet (G1). She has been training forwardly for her sophomore debut and will have Rafael Bejarano aboard from post position two.

Jerry Hollendorfer to saddle five of the ten starters

Second choice at 7-2 on the morning line is Majestic Presence, one of five horses in the race trained by Jerry Hollendorfer. A chestnut daughter of Majestic Warrior, she was purchased for $100,000 as a yearling and has one win from six starts. She is trying to earn the first graded stakes win of her career and was fourth in the Starlet (G1) last time out. Gary Stevens has retained the mount and they will break from post position six.

Suva Harbor trying to make it three in a row

Also in the field at morning line odds of 8-1 is Suva Harbor for trainer John Sadler. A gray daughter of Rockport Harbor, she will be making her stakes debut and comes into this race off of back-to-back victories. She was last seen defeating a field of six rivals in an optional claiming race in her first start of the year. Martin Pedroza, aboard for all four starts to date, will remain aboard and they will break from post position eight.