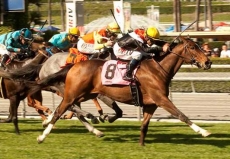 On Sunday at Santa Anita, the featured race is the $200,000 Santa Ana Stakes. The Grade 2 race, carded at a mile and an eighth on the turf, has drawn a field of eleven fillies and mares.

Diversy Harbor tops the field as the morning line favorite at odds of 7-2 for trainer Tom Proctor. A four-year-old daughter of Curlin, the bay filly has been on the board in eight of her ten career starts and has three wins to her credit. Last time out, she earned the first graded stakes victory of her career in her seasonal debut in the Buena Vista Stakes (G2) at Santa Anita. Regular rider Gary Stevens will be aboard carrying the colors of Glen Hill Farm and they will break from post four.

Second choice at 4-1 on the morning line is Queen of the Sand (IRE) for trainer Patrick Gallagher. A five-year-old daughter of Footstepsinthesand (GB), she is a seven-time career winner and will be trying to earn the first graded stakes win of her career. She has been on the shelf since a runner-up effort in the Matriarch Stakes (G1) at Del Mar in November and has been training steadily. Mike Smith will be in the irons and they will break from post five.

Rusty Slipper aiming for first win of the year

Also in the field at morning line odds of 6-1 is Rusty Slipper, one of three horses in the race for trainer Graham Motion. A five-year-old daughter of Lemon Drop Kid, she has won four of her eleven starts and is a Grade 3 winner. She made her first start of the year in the Megahertz Stakes in January at Santa Anita and will try to move forward off of a third-place finish. Aaron Gryder will be aboard from post position seven.