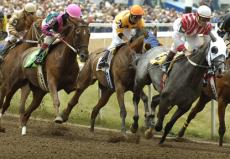 On Tuesday at Fort Erie, a field of ten Canadian-bred three-year-olds will compete in the 79th running of the Prince of Wales Stakes. Contested at a mile and three-sixteenths with a purse of $500,000, the race is the second jewel of the coveted Canadian Triple Crown.

Topping the field at 9-5 on the morning line is Ami’s Holiday, the runner up to the filly Lexie Lou in the Queen’s Plate at Woodbine. The bay son of Harlan’s Holiday will break from post position two for Josie Carroll with Luis Contreras in the irons. While winless from three starts this year, he has won two of his seven starts with his most notably victory coming in the Grey Stakes (G3) as a juvenile.

Mark Casse has a competitive pair of sophomores

The always-formidable Mark Casse barn will send out Matador, 3-1 on the morning line for owner John Oxley. Patrick Husbands will be aboard the son of Malibu Moon as he tries to rebound off of a seventh-place finish in the Queen’s Plate. After competing unsuccessfully on the Kentucky Derby trail, he won over synthetics at Woodbine two races back against optional claiming competition to earn his second career win.

Mark Casse will also send out East Side, a lightly-raced gelded son of English Channel who will break from the inside with morning line odds of 6-1. Owned by Stoneway Farm and scheduled to be ridden again by Justin Stein, the three-year-old gelding broke his maiden in his third career start last time out and will face winners, and stakes company, for the first time. Since his inaugural win, he has had consecutive bullet workouts at Woodbine.