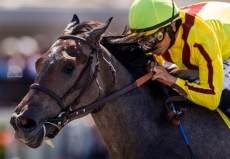 On Saturday at Santa Anita, the featured race is the $200,000 Santa Maria Stakes. Scheduled to be run at a mile and a sixteenth on the main track, the Grade 2 has attracted a field of eight fillies and mares.

Tara’s Tango headlines the competitive field as the morning line favorite at odds of 2-1 for trainer Jerry Hollendorfer. A four-year-old daughter of Unbridled’s Song bred and owned by Stonestreet Stables, she has been on the board in six of her eight starts and will be trying to earn her third career victory. She will be trying to earn her first graded stakes victory and was last seen finishing third in the Santa Monica Stakes (G2). Martin Garcia will be aboard and they will break from the outside post.

Birdatthewire a major contender on the West Coast

Second choice at morning line odds of 5-2 is Birdatthewire for trainer Tom Proctor. A four-year-old daughter of Summer Bird, the bay filly has won four of her twelve starts and is a multiple graded stakes winner. She closed out her sophomore season with a win in the La Brea Stakes (G1) and was second last time out in the La Canada Stakes (G2). Mike Smith will be aboard from post position three.

Yahilwa rounding back to competitive form

Also in the field at morning line odds of 7-2 is Yahilwa for trainer James Cassidy. A six-year-old daughter of Medaglia d’Oro, she is a six-time winner and is trying to notch her second career graded stakes win. After finishing sixth in the Breeders’ Cup Distaff (G1), she moved forward and was third in the La Canada Stakes (G2). Joe Talamo will be in the irons and they will break from post position seven.