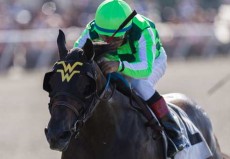 On Friday, the Breeders’ Cup action continues with the Breeders’ Cup Juvenile Fillies Turf. The Grade 1 race will be run at one mile and has attracted an international field of fourteen two-year-old fillies with two additional on the also-eligible list.

Sunset Glow has been tabbed as the 7-2 morning line favorite for trainer Wesley Ward. Purchased for $130,000 as a yearling, the gray daughter of Exchange Rate has won three of her five starts including the Del Mar Debutante (G1). Two of her three victories have come over synthetics but she did break her maiden on the lawn at Belmont and was second on the turf at Royal Ascot. Regular rider Victor Espinoza will be aboard and they will break from post three.

Qualify (IRE) is second choice at 5-1 on the morning line for trainer Aiden O’Brien and the bay filly will be making her stateside debut after competing in Ireland. She has won two of her six starts including a Group 3 at the Curragh in her most recent outing. A daughter of Fastnet Rock (AUS), she will receive Lasix for the first time. Ryan Moore will be aboard for the first time and the pair will break from the outside post in the full field.

Also in the field and a longshot at 12-1 on the morning line is Rainha Da Bateria for trainer Graham Motion. Purchased for $425,000 as a yearling by Three Chimneys Farm, the chestnut daughter of Broken Vow broke her maiden at first asking at Saratoga in July on the lawn. After a fourth-place finish in the PG Johnson, she rebounded to win the Jessamine Stakes (G3) at Keeneland under Joel Rosario. Rosario will be back aboard and they will break from post seven.