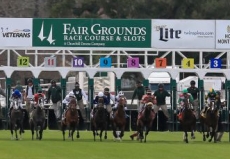 On Saturday at Fair Grounds, the stakes races will continue with the $60,000 Daisy Devine Stakes. Scheduled to be run at about a mile and a sixteenth on the turf, the stakes race has drawn a field of ten fillies and mares.

Street of Gold has been installed as the morning line favorite in the wide open field at odds of 7-2 and is one of two fillies in the race for trainer Brad Cox. A six-year-old daughter of Street Sense, she is a five time career winner and a multiple stakes winner. She has rounded into form since coming to Fair Grounds in December and is coming into this race off of a win in the Marie G. Krantz Memorial Stakes. Robby Albarado will be aboard and they will break from post position three.

Second choice at morning line odds of 9-2 is Faufiler (IRE) for trainer Graham Motion. A five-year-old daughter of Galileo (IRE), she is out of the Breeders’ Cup Mile (G1) winner Six Perfections (FR) and has been on the board in eight of her eleven starts with four wins. Since coming to the United States from France, she has been eighth in both starts against graded stakes competition. Joe Bravo will be aboard and they will break from post position five.

Notte d'Oro back off of four-month break

Also in the field at morning line odds of 9-2 is Notte d’Oro for trainer Christophe Clement. A five-year-old daughter of Medaglia d’Oro, she has been on the board in half of her sixteen start and is a five-time winner. She was last seen finishing second in the River Memories Stakes at Woodbine in October and has been training steadily since December for her return to the races. Julian Leparoux will be aboard and they will break from the outside.