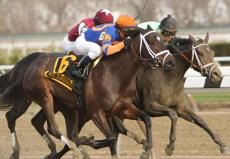 On Saturday, Saratoga will host the 134th running of the $600,000 Alabama Stakes. The prestigious Grade 1 event for three-year-old fillies will be run at a mile and a quarter and has attracted a field of nine.

Stopchargingmaria has been installed as the 2-1 morning line favorite for trainer Todd Pletcher. The sophomore daughter of Tale of the Cat was purchased for $220,000 as a juvenile for Repole Stable and has won five of her nine starts. She is attempting to earn her third consecutive graded stakes victory this year after winning the Black Eyed Susan (G2) and the Coaching Club American Oaks (G1). She will break from post eight with John Velazquez aboard.

Second choice at 4-1 on the morning line is Unbridled Forever. Bred and owned by Charles Fipke, the three-year-old daughter of Unbridled’s Song is trained by Dallas Stewart and will have Rosie Napravnik aboard for the first time. She has been on the board in all five starts this year was last seen finishing second to Stopchargingmaria in the Coaching Club American Oaks (G1). The bay filly has drawn the inside post and will be going for her first graded stakes win.

Blinkers on for Bobby Flay's America

Also in the field is Bobby Flay’s homebred filly America, a longshot at 15-1 on the morning line. Trained by Hall of Fame conditioner Bill Mott, the well-bred filly has not won from five starts this year and only has a maiden victory as a juvenile to her credit. Irad Ortiz, Jr. will be back in the irons and was aboard for a third-place finish in the Mother Goose (G1). She will get the addition of blinkers for the first time and has had a bullet workout since her last race.