Stonetastic Back From Breeders' Cup in $100,000 Sugar Swirl Stakes 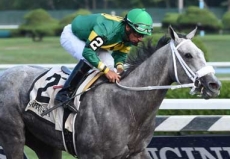 On Saturday at Gulfstream Park, the stakes action will kick off with the $100,000 Sugar Swirl Stakes. A Grade 3 event scheduled to be run at six furlongs on the main track, the stakes race has drawn a field of seven fillies and mares.

Stonetastic headlines the field as the even-money favorite on the morning line for trainer Kelly Breen. A four-year-old daughter of Mizzen Mast, she has been on the board in nine of her thirteen starts and is a four-time winner. She missed most of the year and returned to the races in August off of an eight-month layoff. In her most recent start, she finished eighth in the Breeders’ Cup Filly and Mare Sprint (G1). Paco Lopez will be aboard and they will break from post two.

Second choice at morning line odds of 7-2 is Best Behavior for trainer Martin Wolfson. A five-year-old daughter of Into Mischief, she is an eight-time winner and will be trying to step forward and earn her first graded stakes victory. She has been on the board in six of her eight starts this year and was last seen finishing second in the Rampart Stakes (G3). John Velazquez will be aboard and they will break from post position four.

Step up in class for Miss Melinda

Also in the field at morning line odds of 6-1 is Miss Melinda for trainer Bill Mott. A four-year-old daughter of Malibu Moon, she has been on the board in ten of her eighteen starts and is a three-time winner. She will be trying to earn her first black type victory and was third in the Dream Supreme Stakes last time in her first start in a stakes race. Junior Alvarado will be aboard and they will break from post positon three.