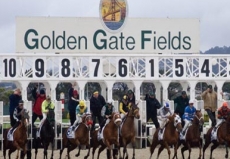 On Saturday at Golden Gate, the featured race is the $50,000 Oakland Stakes. Carded at six furlongs on the all-weather synthetic main track, the race has drawn a field of eight.

Streamside has been installed as the heavy favorite at odds of 9-5 on the morning line for trainer Sergio Ledezma. A six-year-old son of E Dubai, he is a thirteen time winner and will be trying to earn the second stakes victory of his career. Last time out, he notched his third win of the season in an allowance race at Golden Gate. Juan Hernandez will be in the irons and they are scheduled to break from post position five as he goes for his second straight win.

Glacken Too consistent with some back class

Second choice at morning line odds of 5-2 is Glacken Too for trainer Steven Sherman. A four-year-old son of Smoke Glacken, he has been on the board in eight of his thirteen starts and has hit the board against graded stakes competition. He is trying to earn his third career victory and was third in the Santa Anita Sprint Championship (G1) last time out. Russell Baze will be aboard and they will break from post position four.

City by the Bay taking on the boys

Also in the race at morning line odds of 10-1 is City by the Bay, the lone filly in the field taking on male rivals. Trained by William Morey, she is a four-year-old daughter of City Zip and the bay filly has been on the board in eight of her ten starts with five wins. She is trying to move forward after a fourth place finish last time out in only her third start of the year. Ricardo Gonzalez will be aboard and they will break from post position three.