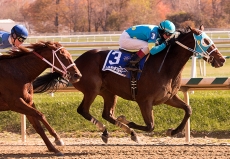 On Saturday at Laurel Park, the stakes action will kick off with the $100,000 Gin Talking Stakes. Restricted to two-year-old fillies, the seven furlong contest has drawn a field of seven.

Cathryn Sophia has been tabbed as the overwhelming morning line favorite at odds of 1-2 for trainer Jason Servis. Bred in Maryland, the bay filly was purchased for $30,000 as a yearling and will be making her stakes debut. Last time out, she made her first start a winning one and broke her maiden impressively by 12 ¾ lengths as the favorite over eight rivals at Parx. Roberto Rosado will be back aboard and they will break from post position six.

Second choice at morning line odds of 5-1 is Look Who’s Talking for trainer Robin Graham. A homebred for Skeedattle Racing foaled in Maryland, she is a dark bay daughter of Cape Blanco (IRE) and has been on the board in three of her four starts. She broke her maiden in her debut and was last seen finishing third in an optional claiming race at Laurel. Forest Boyce will be aboard and they will break from post position two.

Class test for Dare to Be after maiden win

Also in the field at morning line odds of 8-1 is Dare to Be from the barn of Rodney Jenkins. A bay daughter of Successful Appeal, she fetched $40,000 at auction and will be stepping up to stakes company for the first time. After two runner-up efforts, she broke through and earned her maiden victory last time out at Laurel. Regular rider Victor Carrasco will be aboard and they will break from the outside post.