Small But Competitive Group Lines up to Contest Debutante 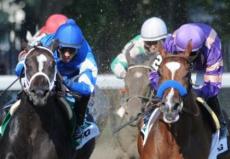 The 2014 renewal of the $100,000 Debutante Stakes at Churchill Downs this Saturday – June 21 - features a six pack of two year-old fillies looking for a signature win to boost their young career. Of the six starters lined up to contest the race scheduled for six furlongs on the main track, five were first-out winners with Ol Sanish, who is 5-1 here in the morning line, finishing second by a length and three quarters to the likely post-time favorite Rachel’s Ready (3-1).

Race is setting up for quick fractions on the front end

In a race that figures to be loaded with early speed, 3-1 co-second choice, Promise Me Silver looks like she could be the one to catch when the gates open. Promise Me Silver broke her maiden at Lone Star Park against state breds by nearly 7 lengths. She is trained by William Brett Calhoun who saddled last year’s Debutante winner Fiftyshadesofgold, also a Texas bred.

The Mark Casse trained Unbridled Reward is the 2-1 morning line favorite after a debut that saw her take a 4.5 furlong race by a staggering 7 and three quarter lengths on May 30 at Churchilll Downs over a sloppy track.  Unbridled Reward could vie for the early lead or sit just behind the pace.

Rachel’s Ready, trained by David Vance, demonstrated an impressive stalk-and-pounce style over this surface June 8 en route to defeating Ol Sanish. Rachel’s Ready is ideally drawn on the outside to use similar tactics while sitting just off the pace setters. Rachel’s Ready was a $210,000 purchase as a yearling at the Keeneland sale.