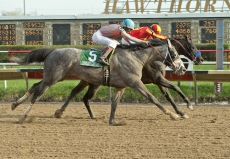 On Saturday at Belmont Park, the stakes action will begin with the $200,000 Peter Pan Stakes. A Grade 2 race carded at a mile and an eighth, the race has drawn a field of five colts and geldings and has traditionally served as a prep race for the Belmont Stakes (G1).

Two Weeks Off tops the field as the morning line favorite at odds of 9-5 for trainer Todd Pletcher. A dark bay son of Harlan’s Holiday owned by Starlight Racing, he has won two of his three starts and will be making his stakes debut. He returned off of an eight-month layoff to win an allowance race at Keeneland last time out and in doing so set a new track record. John Velazquez will be in the irons and they are scheduled to break from post position four.

Wolf Man Rocket going for back to back stakes wins

Bob Baffert will saddle Wolf Man Rocket as the second choice at 2-1 on the morning line. A chestnut son of Mineshaft, he broke his maiden against stakes company last time out in the Northern Spur Stakes at Oaklawn Park after finishing second in both maiden races.  He has been training forwardly since that race and will break from the rail under jockey Irad Ortiz, Jr.

Also in the field at morning line odds of 5-1 is Conquest Curlinate for trainer Mark Casse. Owned by Conquest Stables, the gray son of Curlin has been on the board in three of his four starts and was second in the Illinois Derby (G3) in his stakes debut last time out. Shaun Bridgmohan will remain aboard and they are scheduled to break from post position three.