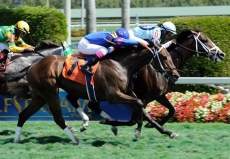 On Saturday at Gulfstream Park, the final leg of an all-stakes Pick Three is the 48th running of the $100,000 W.L. McKnight Handicap. The Grade 3 race will be contested at a mile and a half on the turf and has drawn a full field of fourteen with two additional listed as also-eligible.

Topping the field as the morning line favorite at 3-1 is Slumber (GB) who will be making his first start for trainer Chad Brown.  A six-year-old son of Cacique (IRE), he has gone winless from four starts this year but has hit the board in his last three starts against stakes competition. He was second as the favorite in the Bowl Game last out to North Slope, who he faces again here. Joel Rosario will be aboard for the first time from post position six.

Royally-bred North Slope going for two in a row

North Slope, a son of Elusive Quality bred and owned by Darley Stable, is the second choice at 7-2 on the morning line. Trained by Kiaran McLaughlin, the four-year-old gelding will be trying to earn the first graded stakes win of his career after a narrow decision in the Bowl Game Stakes last time out. He has won four of his eighteen career starts and has been training steadily since his last race. Irad Ortiz, Jr. will remain up and they will break from post three.

Also in the field at morning line odds of 9-2 is Divine Oath, a three-year-old who will be taking on older rivals for trainer Todd Pletcher. Purchased for $200,000 as a yearling, the bay son of Broken Vow has won four of his eight starts including a pair of Grade 3 stakes. He was last seen finishing third, beaten half a length, in the Twilight Derby (G2). Javier Castellano, aboard for half of his career starts, will be back in the irons from post thirteen.