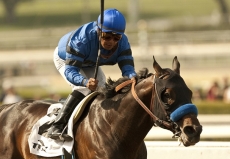 On Friday at Del Mar, the featured race is the $100,000 Cougar II Handicap. Scheduled to be run at a mile and a half over their newly-installed dirt main track, the Grade 3 event has drawn a field of seven colts and geldings.

Sky Kingdom headlines the field as the morning line favorite at odds of 2-1 for trainer Bob Baffert. A six-year-old son of Empire Maker, he has won six of his twenty starts and is a multiple graded stakes winner. He has finished second in the past two editions of the Cougar II Handicap (G3) and will be trying to earn his second victory of the year. Last time out, he finished third in the Brooklyn Invitational (G2) and will have Martin Garcia aboard from post position three.

Big John B heading in the right direction

Second choice at 5-2 on the morning line is Big John B for trainer Philip D’Amato. A six-year-old gelded son of Hard Spun, he is a twelve-time career winner and earned his first graded stakes victory last year. After an eighth-place finish in the Last Tycoon Stakes (G3) in his first start of the year, he rebounded to win a starter handicap at Santa Anita last time out. Rafael Bejarano will be in the irons and they will break from post five.

Also in the field at morning line odds of 7-2 is Cat Burglar who also comes out of the Bob Baffert barn. A five-year-old son of Unbridled’s Song, the chestnut has been on the board in nine of his eleven starts and is trying to earn his first stakes victory. He was fifth last time out in the Stephen Foster (G1) and has been training steadily since then. Victor Espinoza will be aboard and they are scheduled to break from post position two.