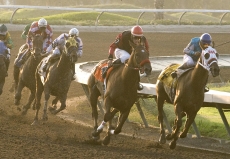 On Sunday at Los Alamitos Race Course, the featured race is the 3rd edition of the $200,000 Soviet Problem Stakes. Restricted to two-year-old fillies bred in California or sired by a California-based stallion, the one mile contest has drawn a field of six.

My Fiona has been installed as the morning line favorite at odds of 8-5 for trainer Walter Solis. Sired by Ghostzapper, the dark bay filly has won three of her five starts, all of which came against state-bred competition. She was last seen winning the Golden State Juvenile Fillies as the favorite over a field of seven rivals. Rafael Bejarano, aboard for her winning effort last time out, has retained the mount and they will break from post position four.

Heat the Rocks taking on winners for the first time

Jerry Hollendorfer will saddle the second choice on the morning line, Heat the Rocks, at odds of 2-1. A daughter of Unusual Heat purchased for $53,000, she broke her maiden last time out in her third career start over Del Mar’s synthetic main track. She was second in her prior start and fourth in her debut. Since that winning effort, she has been training steadily at Santa Anita and will have regular rider Elvis Trujillo aboard from the rail.

Also in the field at morning line odds of 5-1 is Princess Bertrando for trainer Jeff Bonde. The most experienced juvenile in the field with eight starts, she has been on the board five times with one win to her credit. A dark bay daughter of Bertrando, she was last seen finishing third as the favorite against optional claiming competition. Corey Nakatani, aboard for her last two races, will be in the irons from post position five.