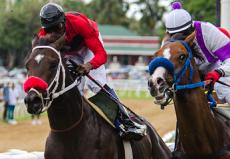 In what is considered a key prep for Arlington Million (G1), turf horses will take center stage on Saturday at Arlington Park in the $200,000 Arlington Handicap. The mile and a quarter turf race has drawn a field of six colts and geldings.

Tabbed at 2-1 as the favorite on the morning line, War Dancer will break from post position two for trainer Ken McPeek. Alan Garcia, aboard for his most recent win in the Louisville Handicap (G3) in May, remains in the irons. A six-figure yearling by hot sire War Front, War Dancer has won four of his thirteen starts and has two graded stakes wins to his credit.

Second choice at 3-1 and breaking from the inside is Admiral Kitten. The home bred son of Ken and Sarah Ramsey's popular stallion Kitten's Joy won the Secreteriat Stakes (G1) last year at Arlington at the mile and a quarter distance. Julian Leparoux will be back aboard for Michael Maker and the bay colt was last seem finishing a disappointing ninth in the Monmouth Cup (G2).

Infinite Magic, a ridgling son of More Than Ready, took the American Derby (G3) last year for the trainer and jockey combination of Richard Mettee and Channing Hill. The pair will team up again and will break from the outside at morning line odds of 10-1. It will be the second start of the year and he was fourth in his last start, an optional claiming race at Belmont Park, in June.