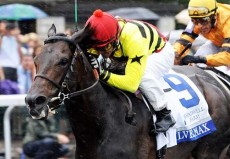 On Saturday at Churchill Downs, the featured race is the 37th edition of the $100,000 River City Handicap. The Grade 3 race will be run at a mile and an eighth on the turf and has attracted a field of eleven.

Silver Max, a Grade 1 winning son of Badge of Silver, has been installed as the 7-5 morning line favorite for trainer Dale Romans. The five-year-old has one win from three starts this year and that came at Churchill Downs in the Firecracker (G2) in June. He has twelve career victories to his credit and his most notable achievement was dethroning champion Wise Dan in the Shadwell (G1) in 2013. Regular rider Robbie Albarado will be aboard from post six.

Aldous Snow trying to rebound after a pair of average efforts

Second choice at 5-1 on the morning line is Aldous Snow who is shipping in from Woodbine for trainer Malcolm Pierce. He is trying to return to winning form after finishing sixth in his last two starts, both of which came against graded stakes competition. He has two wins from four outings this year including a victory in the Singspiel (G3) at Woodbine in July. Joe Rocco, Jr. will be aboard and they are slated to break from post nine.

Also in the field is Under Control (BRZ) for trainer Graham Motion at odds of 8-1 on the morning line. The six-year-old gelded son of Northern Afleet has been on the board in four of his six starts this year and was last seen finishing fifth in the Laurel Turf Cup. He is trying to earn the first graded stakes victory of his career and will have Alex Cintron aboard from the outside post. His lone win this year came against optional claiming competition.