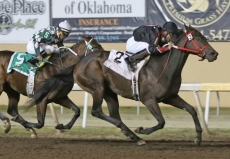 On Sunday at Remington Park, the track will host the $250,000 Remington Springboard Mile. Run at a distance of one mile, the race has attracted a field of ten juvenile colts and geldings.

Shotgun Kowboy, bred in Oklahoma, has been installed as the morning line favorite at odds of 2-1. Bred, owned and trained by C.R. Trout, the locally-based gelding has won three of his four career starts, all of which came at Remington Park. He was last seen defeating a field of seven rivals in the Clever Trevor Stakes to earn his second consecutive stakes victory. Regular rider Luis Quinonez will be aboard and they will break from post position eight.

Bayerd back for another round with rival Shotgun Kowboy

Steve Asmussen will saddle the second choice, Bayerd, at 5-2 on the morning line. A bay son of Speightstown purchased for $75,000, he was second as the favorite to Shotgun Kowboy in the Clever Trevor Stakes last time out. Prior to that, he had back to back victories including a win in the Kip Deville Stakes at Remington Park. He has been training sharply since his last race and will have Ricardo Santana, Jr. back aboard from post three.

Also in the field at morning line odds of 3-1 is High Noon Rider for trainer George Weaver. Purchased for $400,000 as a yearling, the bay colt broke his maiden last time out in his third career start. He prevailed by a head in a front-running effort over a field of nine rivals. Prior to that, he was sixth and third against maiden company in New York. He has had a bullet workout since that winning effort and will have Joe Bravo aboard from the outside post.