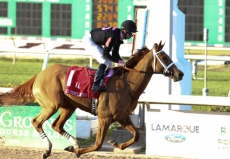 On Saturday at Fair Grounds, a field of ten Kentucky Oaks hopefuls will line up for the 35th edition of the $175,000 Rachel Alexandra Stakes. The Grade 3 race for three-year-old fillies will be contested at a mile and a sixteenth on the main track.

Steve Asmussen, the trainer of the superstar filly Rachel Alexandra, will saddle Shook Up as the morning line favorite at odds of 7-2. A gray daughter of Tapit, she will be making her stakes debut and has one win from three career starts. She broke her maiden in a romp at Fair Grounds as the heavy favorite in January and wound up second to Lovely Maria, again at short odds. Robby Albarado has retained the mount and will break from the rail.

I'm a Chatterbox going for two stakes wins in a row

Second choice at 4-1 on the morning line is I’m a Chatterbox, a homebred for Fletcher and Carolyn Gray. A chestnut daughter of Munnings, she broke her maiden in her career debut as a juvenile and was third and fourth in her next two starts. She made her sophomore debut a winning one with a front-running, eight-length score in the Silverbulletday Stakes at Fair Grounds in January.  Florent Geroux will be back aboard and they will break from the outside post.

Also in the field at morning line odds of 5-1 is Angela Renee for trainer Todd Pletcher. Bred and owned by Siena Farm, the bay daughter of Bernardini has been on the board in five of her six starts. After wearing blinkers in her last four starts, she will compete without them for the first time since August. She closed out her juvenile season with a third-place finish in the Demoiselle (G2) and has been training steadily for her first start of the year. Rafael Bejarano will be aboard from post six.