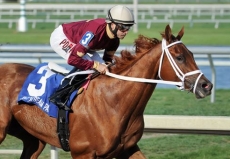 On Saturday at Delaware Park, the featured race is the $750,000 Delaware Park Handicap. A Grade 1 event for fillies and mares, the race will be contested at a mile and a quarter on the main track and has drawn a field of seven.

Sheer Drama has been tabbed as the morning line favorite at odds of 2-1 for trainer David Fawkes. Bred and owned by Harold Queen, the five-year-old daughter of Burning Roma has won four of her seventeen starts and has been first or second in all five outings this year. After winning the Royal Delta Stakes (G2) at Gulfstream Park in March, she has been second in her last two starts against graded stakes competition. Joe Bravo will be in the irons and they will break from post position five.

Frivolous trying to prove upset win was not a fluke

Second choice at 3-1 on the morning line is Frivolous for trainer Victoria Oliver. A homebred daughter of Empire Maker for G. Watts Humphrey, Jr., she was last seen winning the Fleur de Lis Handicap (G2) at Churchill Downs in an upset performance at odds of 32-1. That was the second graded stakes victory of her career. Jon Court will be aboard as she goes for two in a row and they will break from the rail.

Also in the field at morning line odds of 8-1 is America for trainer Bill Mott. Bred and owned by celebrity chef Bobby Flay, the four-year-old daughter of A.P. Indy has won four of her fifteen starts and is trying to earn the first graded stakes victory of her career. She has been off the board in her last two starts against graded stakes competition and is scheduled to break from post two under Junior Alvarado.