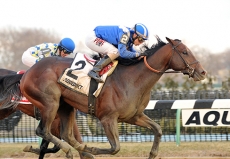 On Saturday at Aqueduct, the road to the Kentucky Derby will run through New York with the $1 million Wood Memorial. The Grade 1 event will be contested at a mile and an eighth on the main track and has drawn a field of eight colts and geldings.

Shagaf has been installed as the morning line favorite at odds of 2-1 and is one of two contenders for trainer Chad Brown.  A homebred for Shadwell Stable who also own multiple graded stakes winner Mohaymen, this bay son of Bernardini is undefeated from three starts. He made his career debut at Aqueduct in November and followed that up with an allowance victory. He stepped up to stakes company successfully in the Gotham Stakes (G3) last time out. Irad Ortiz, Jr. will be aboard from the rail.

Second choice at morning line odds of 5-2 is Outwork for trainer Todd Pletcher. Bred and owned by Repole Stable, the bay colt is from the first crop of champion Uncle Mo who also carried Mike Repole’s colors on the track. Outwork has two wins from three starts and was last seen finishing second behind stablemate Destin in the Tampa Bay Derby (G2). John Velazquez will be in the irons and they will break from the outside post.

Also in the field at morning line odds of 3-1 is Matt King Coal for trainer Linda Rice. A bay son of Cool Coal Man, he has been on the board in all four starts and is coming into this race off of two consecutive victories. He had a front-running victory in an allowance race last time out at Aqueduct and will be getting a class test and making his stakes debut. Jose Ortiz will be aboard and they will break from post position six.