Secret Circle Trying For a Repeat in The $1.5 Million Breeders' Cup Sprint 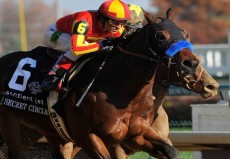 On Saturday at Santa Anita, the championship races continue with the $1.5 million Breeders’ Cup Sprint. The Grade 1 race has attracted some of the fastest six-furlong specialists in the world with a full field of fourteen as well as two on the also-eligible list.

Secret Circle, winner of the 2013 edition of the Breeders’ Cup Sprint as well as the now-defunct Breeders’ Cup Juvenile Sprint in 2011, is back to defend his title as the morning line favorite at odds of 9-2. He is winless from two races this year and was last seen finishing third behind Rich Tapestry (ire) and the Dirt Mile favorite, Goldencents. Trained by Bob Baffert, the five-year-old son of Eddington will have regular rider Martin Garcia aboard and they will break from post position four.

Rich Tapestry (IRE) has been tabbed as the second choice at 5-1 on the morning line after delivering with a win in his local debut in the Santa Anita Sprint Championship (G1). Trained by Michael Chang and ridden by Olivier Doleuze, the six-year-old gelding was bred in Ireland but spent most of his career competing successfully in Hong Kong. He has won two of his four starts this year and seven times in his career. Rich Tapestry (IRE) will break from post six.

Salutos Amigos wheeling back on a short rest

Also in the field is Salutos Amigos at morning line odds of 6-1 for trainer David Jacobson. The four-year-old gelded son of Salute the Sarge won the Bold Ruler Handicap (G3) at Belmont Park on October 25 and  is making the cross-country trip to Santa Anita off of a week’s rest. A former claimer, the gelding has won five of his 22 starts, four of which came since switching to the Jacobson barn this year. Javier Castellano will be aboard from post nine.