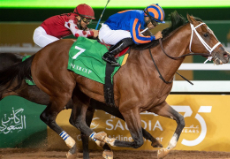 Just the second running of the $20 million Saudi Cup will take place February 20, with this being the best place to find Saudi Cup 2021 betting picks. This nine-furlong race is part of a blockbuster card with $30.5 million in purses, and the Saudi Cup itself is the richest Thoroughbred race in the world.

Because it is a rich race open to the most top class of horses, the Saudi Cup should be a race filled with the best Thoroughbreds in the world. However, because of its location at King Abdulaziz Racecourse in Riyadh, it is quite the journey for horses and their connections to make the trip. Still, the 2021 Saudi Cup field is expected to include:

Check this spot for live Saudi Cup odds when they become available, as well as Saudi Cup post positions and the jockeys and trainers involved in the Saudi Cup. The official post position draw takes place on Wednesday, February 17.

Favoritism in the Saudi Cup will come down to two horses, Charlatan and Knicks Go. These two horses are superstar types from America, and they both have a big shot in the race. Charlatan was one of the top three-year-olds of 2020 but was knocked out of Kentucky Derby contention when he was injured before the race. He returned with a smashing, big win in the Malibu Stakes, a Grade 1 race at Santa Anita. Bob Baffert trains the popular red colt, who is full of undeniable talent.

An effortless speed type is Knicks Go. The son of Paynter was a top-class juvenile, winning in Grade 1 company at Keeneland, and running second in the Breeders' Cup Juvenile at Churchill Downs. He missed a lot of racing with downtime but rebounded in a big way to take the Breeders' Cup Dirt Mile in November, followed by the 2021 Pegasus World Cup at Gulfstream Park last out. Brad Cox trains the superstar gray, who will go head to head with Charlatan. They both arrived from America on the same flight on February 10.

They aren't the only talented horses. Mishriff won the Group 1 French Derby and finished second in the Saudi Derby over this same course last year. He is trained by brilliant English trainer John Gosden.

Sleepy Eyes Todd is a very popular horse in America. The gray horse ran at nine different tracks in nine races and won on the Breeders' Cup undercard at Keeneland in November. He finished fourth in the Pegasus World Cup after winning the Mr. Prospector Stakes at Gulfstream Park. He would be a big upset winner.

Tacitus is the last of the major American invaders. The son of Tapit and the great mare Close Hatches has earned $3.2 million without ever winning a major race. He skipped the Pegasus to point for this race.

How to bet the Saudi Cup Online

If you want to make the most of your betting money, you need to learn where to bet the 2021 Saudi Cup online. There are lots of websites out there that seem to offer plenty of flashy wagering chances, but you can trust our reviews on the best online betting platforms and sportsbooks. It will help to learn how to properly bet on horse racing to make sure you get the most profit from your selections. Each racebook offers its own bonuses, so pick the right one for you to make the most money with your Saudi Cup wagers.

Because this race is a Grade 1 event over 1 1/8 miles around one turn, you will need a horse with natural speed. The American horses break quickly from the gate and are tough to catch in one-turn events like these, especially compared to some of the English horses that are not used to going so quickly, so early. Local runners might have a shot as they have run over the track before. Both Knicks Go and Charlatan have plenty of speed and will be tough to catch; Knicks Go is expected to be on the front end early, while Charlatan bides his time.

Charlatan is your most likely winner, with Knicks Go expected to give him quite a fight. Both horses and head and shoulders above the rest, but a horse like Mishriff could hit the board or even upset the winners at a price and must be included.

The first Saudi Cup was run in 2020, and featured a very brave Maximum Security, the Champion Three Year Old Male of 2019, outrunning the top-class mare Midnight Bisou in a dramatic finish. The race could be every bit as good this year! The supporting races on the staggeringly good card are the $1 million Neom Turf Cup, the $2.5 million Red Sea Turf Handicap, and the $1 million STC 1351 Turf Sprint, followed by the $1 million Jockey Club Local Handicap, the $2 million Arabian Classic, the $1.5 million Saudi Derby, and the $1.5 million Riyadh Dirt Sprint. Horses will come from around the world to compete in these races, including those horses from Japan.