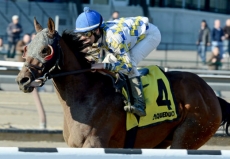 The graded stakes action will continue on Saturday at Churchill Downs with the $500,000 Churchill Downs Stakes. A seven furlong sprint, the Grade 2 event has drawn a field of nine colts and geldings.

Salutos Amigos has been tabbed as the morning line favorite at odds of 5-2 in the competitive field for trainer David Jacobson. A six-year-old gelded son of Salute the Sarge, he is a twelve time winner. He is coming into this race off of back to back wins against graded stakes competition and was last seen winning the Carter Handicap (G1) at Aqueduct. Cornelio Velasquez will be in the irons and they are scheduled to break from post position eight.

Kobe's Back a threat from off of the pace

Second choice at morning line odds of 4-1 is Kobe’s Back for trainer Peter Miller. A five-year-old son of Flatter, he has won five of his eighteen starts and is undefeated from two starts this year. Last time out, he won the San Carlos Stakes (G2) in his typical style from off the pace. He has had a bullet workout since that race and will break from the rail under regular rider Gary Stevens.

Undefeated Speightster back off long layoff

Also in the field at morning line odds of 6-1 is Speightster for trainer Bill Mott. A four-year-old son of Speightstown bred and owned by WinStar Farm, he is undefeated from three starts and has been on the sidelines since winning the Dwyer Stakes (G3) last July. He has been training well for his return to the races and will break from post position six with Jose Lezcano aboard.