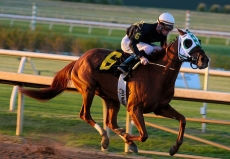 The $100,000 Richard W. Small Stakes November 15 at Laurel Park features a full field of thirteen older horses going a mile and an eight on the main track in a betting smorgasbord sure to whet the appetite of horse players.

Stormin Monarcho is the 7/2 morning line favorite for trainer David Jacobson after a fourth place effort in his most recent start – the Eight Miles West Stakes October 11 at Gulfstream Park West.  Prior to that effort, the well-traveled four year-old son of Kentucky Derby winner Monarchos won the Governors Day Stakes at Deleware Park, ran fourth in the Left Bank Stakes at Belmont, and recorded  second place finish in the Alydar Stakes at Saratoga.  In 2014, Stormin Monarcho has raced ten times at six different race tracks while thrice finding the winner’s circle.

Ground Transport always finds himself in the mix

Ground Transport (5/1) is another classy veteran in with a chance.  In nine starts this year, the Trevor McCarthy trainee has won three and finished in-the-money a total of six times for earnings over $226,000.  The graded stakes placed Ground Transport is a multiple winner of minor stakes events including the Drosselmeyer Stakes May 4 at Belmont.

Neck n' Neck back in action

The once promising Neck n’ Neck (10/1) was last seen running sixth in the Grade 1 Donn Handicap at Gulfstream Park last February.  The Ian Wilkes trainee is a multiple graded stakes winner and the most accomplished horse in the field.  However, Neck n’ Neck must overcome the rest and the number 13 post position.