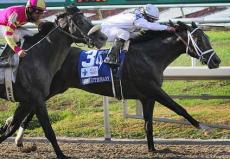 Revolutionary has catapulted himself to the top tier of the older male division and will try to stake his claim as Palace Malice’s biggest threat for championship honors in Saturday’s $500,000 Stephen Foster Handicap (G1) at Churchill Downs. Installed as the 2-1 morning line favorite, he will not be unopposed and will face eight rivals in the mile and an eighth contest for three-year-olds and up on the dirt.

Will Take Charge has a recent win over the favorite

Will Take Charge, breaking from post position four under Gary Stevens, has been given morning line odds of 5-2. The massive chestnut colt will be attempting to rebound after a disappointing sixth-place finish in the Alysheba Stakes (G2) on May 2 for Hall of Fame trainer D. Wayne Lukas. Prior to that flat performance, the reigning champion three-year-old had three competetive efforts against top class stakes company, most notably with a win in the Oaklawn Park Handicap (G2) over Revolutionary.

Longshot Long River trying to take a step up in class

Revolutionary, trained by Todd Pletcher with Mike Smith named in the irons, will break from the inside post. At one point considered a top Triple Crown player in 2013, the inconsistent colt went to the sidelines after the Belmont Stakes and returned in January at Gulfstream. He has two wins from four starts this year. Also in the field is the royally-bred Long River (15-1). By top stallion A.P. Indy and out of a Grade 1 winning mare, a win in a graded stakes race would cement his appeal as a stallion. He was last seen finishing fifth in the Charles Town Classic (G2) but was only narrowly defeated by a neck in the Excelsior (G3) two starts back.